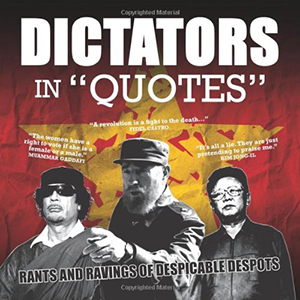 Millions of people in dozens of countries across the globe live under the autocratic rule of a dictator whose utterances, edicts, excesses and actions are both chilling and ludicrous in equal measure. These rulers, who typically subjugated a population by force, are the worst egotists, the vilest perpetrators of crimes against humanity, and the most vilified by the people lucky enough to live in the free and democratic world. With the aid of more than 150 photographs from the vast archives of the Press Association, this book exposes – by example of their own words – the rhetoric, dictums and double standards of more than 65 dictators from around the world, and reveals a fascinating insight into the minds of these despicable despots.