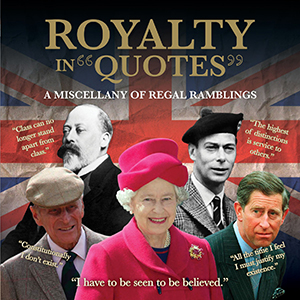 Since the early part of the 20th century, Britain’s Royal family has become increasingly less remote from the population, moving from being largely silent, revered figureheads to take their place at the centre of today’s celebrity culture, their every word and antic reported and dissected by an avaricious media. Their utterances, though, are not always tempered by regal restraint. While many of their words can be kind, compassionate, thought-provoking, self-deprecating, profound and amusing, they can also be arrogant, ignorant, tactless, offensive and downright batty. With the aid of almost 200 photographs from the vast archives of Mirrorpix, this book takes a tongue-in-cheek look at the ramblings of Britain’s Royals, showing that they are indeed human, with the same attitudes and prejudices as the rest of us, even though they may be a little detached from reality.